We are now in the era that many are calling the fourth industrial revolution, more popularly known as digital transformation. Advancements including 5G, AI, machine learning, IoT, automation, and blockchain are enabling businesses to push the boundaries of technological innovations.

This digital transformation is driving business models to move away from highly centralized silos of data to ones that are highly distributed, interconnected, edge points-of-presence (PoPs) in the order of 1K-10K sites. To support this change, networking architectures have migrated to routing-centric scale-up and scale-out designs. The IP Clos designs that were limited to data centers have moved on to every other part of network (EPC, CO, Store Fronts…). End-user experience is top priority driving the need for more bandwidth, lower/predictable latency, carrier-class reliability, and internet security. 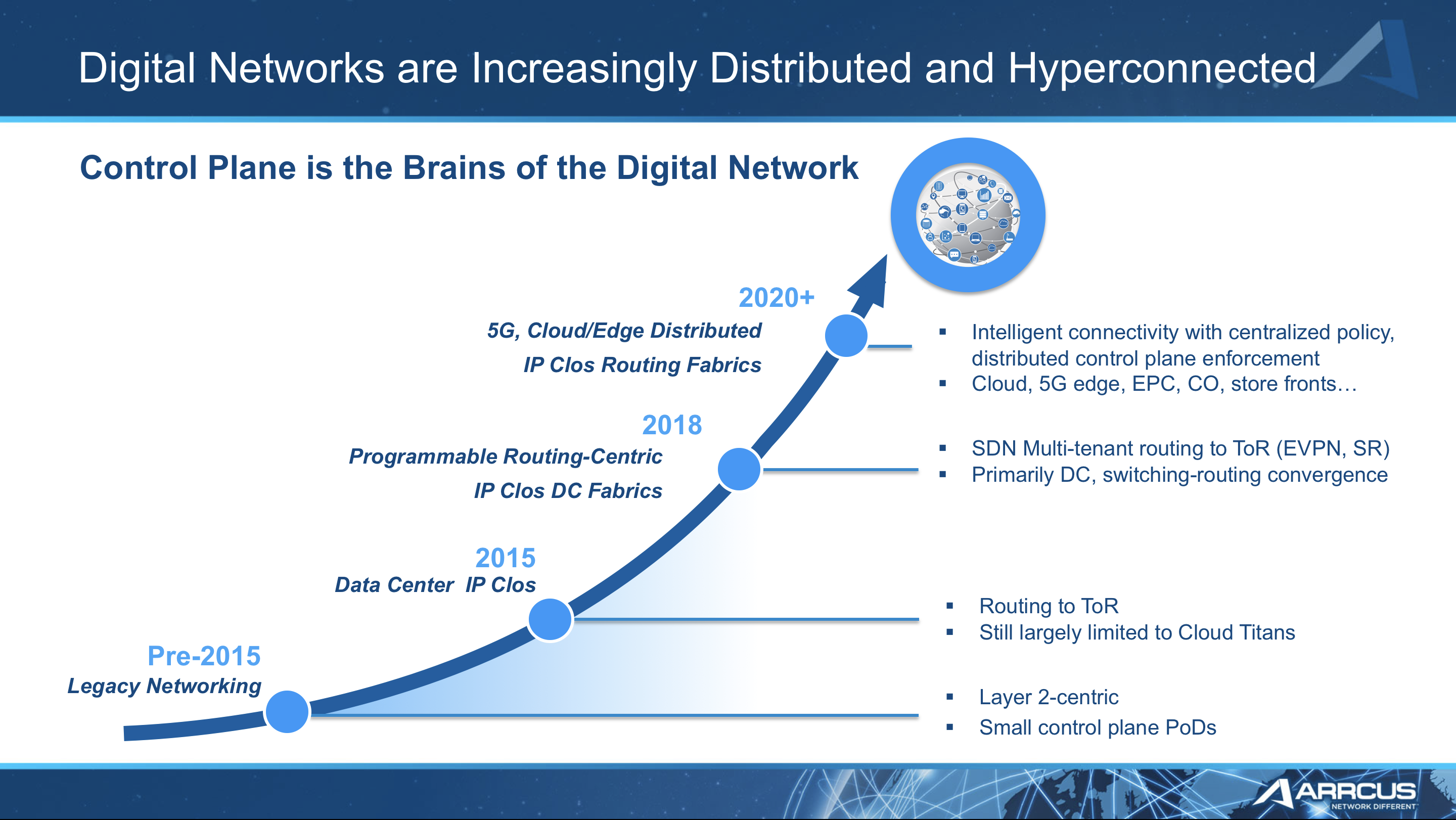 At the same time, the internet backbone and peering points are also facing severe scale-up demands due to the exponential increase in internet devices and the corresponding increase in data traffic. The internet routing table hit the “768K day” on April 22, 2019 just 5 years after hitting the 512K mark! Check out this exponential rise in BGP table sizes here.

We now have the unique opportunity to ensure that hyperscale cloud, edge and 5G networks are designed to be easily deployed and managed, fundamentally secure, and massively scalable. In a nutshell, we need more dynamic, software-driven, cloud-ready, routing-centric architectures, creating new and exciting opportunities to engage and provide new value-added services to end customers.

Constraints of the Current Incumbent Offerings

Unfortunately, providers and enterprises are severely constrained by the lack of choices on both routing platforms and networking software. This forces them to fall back to legacy, incumbent OEM solutions especially in the edge and the backbone.

It is not for lack of trying. The alternatives to the router incumbents in the market have been limited in scale and performance due to cobbling together off-the-shelf and/or open source routing “stacks” with existing layer 2 software. They have also suffered from lack of interoperability with decades old incumbent routing offerings. This further limited the ability of the software to be seamlessly deployed across the data center, the backbone and the edge. So, the customers are left with expensive upgrades to incumbents’ routing platforms with custom-ASICs, bloated software, and unnecessarily-inflated TCO.

Another key customer requirement is to be able to transition from today to tomorrow without incurring operational model overhauls or interoperability challenges. Thus, the networking software architectures must support such a seamless transition. Fundamentally, in the digital networks of today and tomorrow, routers should be

That’s why ArcOS was built, from first principles, as a 64-bit internet-scale network operating system with focus on routing. Built on open standards and utilizing a microservices-based architecture, ArcOS is a fully programmable, modular, composable software that

At Arrcus, given our focus on building open standards-based solutions, there is a significant effort to ensure interoperability with third-party systems from both

All these differentiators are why we highlight “ArcOS Anywhere” from the datacenter, to the edge, to the cloud.

From day 1, ArcOS has supported both Broadcom XGS and DNX platforms (the first independent NOS in the industry to support Trident 3 and Jericho+), and the associated use cases that leveraged these silicon families to the fullest extent. For example, ArcOS supported the full internet routing table ingestion on the DNX Jericho+ platforms. We extended our leadership by enabling 400G networking with our support of Tomahawk 3-based platforms in January 2019.

Furthermore, in March of 2019, in keeping with our focus on simplifying architectures and deployments, we announced the support for BGP/EVPN that included both a standards-based BGP Link-State Vector Routing (LSVR) underlay as well as a traditional IGP underlay option. By using BGP as independent processes in both the underlay and the overlay, our customers are simplifying their operational environments with one less protocol to manage.

With today’s announcement, Arrcus is unleashing a new, democratized networking paradigm into the $6B router market by providing best-in-class software, a flexible deployment model, and the lowest total cost of ownership for our customers. We provide a unified software solution that scales up, scales out, and powers a family of Broadcom’s Jericho2 silicon-based platforms for the following new use cases:

Here are some videos that highlight how ArcOS enables simple, scalable, and secure infrastructures:

This is an exciting time to be disrupting the networking industry. At Arrcus, our goal is to continue to provide best-in-class software, a flexible deployment model, and the lowest total cost of ownership for our customers.

If you would like a demo, or would like to learn more about us, please check us out at: https://www.arrcus.com/