The demand for high-capacity network and data center infrastructure is at an all-time high due to the growth of cloud computing and the ramping-up of 5G services. With this ever-increasing data center bandwidth demand, the ability to deliver data reliably at extremely high speeds without any interruption is of utmost importance. In data center networks, the connection from servers(hosts) that are hosting user applications needed higher redundancy and capacity towards the uplink network devices. MLAG or multi-chassis link aggregation (also known by MC-LAG or VPC) originated as a means to provide this redundant uplink connectivity to a host through link aggregation across multiple physical network nodes. The attractiveness of the solution was that the host did not have to partake in the solution and in fact had no knowledge that the links in the LAG were even connected to different upstream nodes.

In this blog we will discuss a modern, standards-based approach to Multi-chassis LAG (MLAG) and how Arrcus is paving the way to better offer this solution to our customers.

While traditional MLAG solutions addressed the key requirement of providing active-active redundancy to the host, they tend to be rigid and less adaptable to some of the newer use cases and possess the following limitations:

Now there is an alternative to replace these above proprietary solutions – a solution that is standards-based, simple, scalable, provides all-active multi-homing and removes the dependency on peer-link(s). The Arrcus Open MLAG solution, shown on the right in Fig 1., is providing the same all-active LAG for the multi-homed hosts, but the key differentiator of an Arrcus Open MLAG solution is that it utilizes standards-based BGP EVPN to provide this capability and eliminates the requirement of peer-link(s). 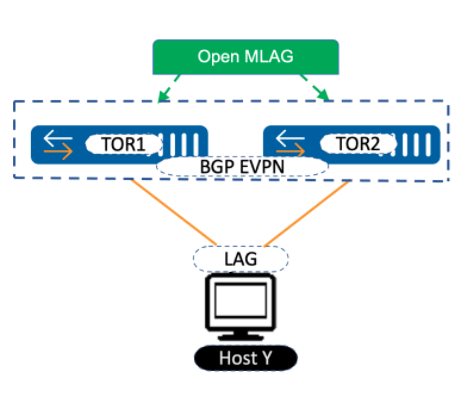 As shown in Figure 3 below, the Arrcus Open MLAG solution can be deployed in any existing IP CLOS deployment and is transparent to the rest of the IP CLOS devices. This affords a simple migration of legacy MLAG TORs to Arrcus Open MLAG TORs without domain wide service interruption.

Finally, to further simplify usability of this solution for customers who have reservations with BGP EVPN configuration, Arrcus can provide its full automation via the variety of DevOps and API tools.

Visit us at https://www.arrcus.com to learn more about our Arrcus Open MLAG solution and check out the overview video